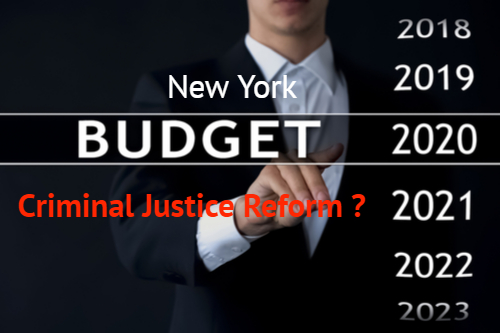 April 2019 started with a 5-page news release announcing that an agreement between Governor Cuomo and Legislative leaders had been reached for the New York State Fiscal Year (FY) 2020 budget.

Known as the FY 2020 Enacted Budget, the $175.5 billion state budget included several major policy changes. Of these, the criminal justice reforms may be some of the most important policies you should be aware of. After all, any reform may leave you wondering whether your civil rights are truly being safeguarded by the lawmakers who enact such legislation.

As a criminal defense and traffic law firm, The Law Offices of Michael H. Ricca P.C. helps to explain what these policy changes mean to you. If you or a loved one have been charged with a crime or traffic offense in New York State, contact our offices today at (516) 500-1647 for a free telephone consultation!

New York is notoriously tough on crime. However, many of those who have faced charges have disputed the fairness of the criminal justice system. From cash bails to prosecution favoritism, the FY 2020 Enacted Budget looks to reform many of these antiquated laws and help ensure a fairer criminal justice process.

New York’s cash bail system has long been a contested aspect of the pretrial process. The FY 2020 Enacted Budget strives to reform this and help modernize the New York bail system. How?

It is estimated that roughly 90% of those sitting in jail awaiting trial are there simply because they do not have the economic means to meet a cash bail. In other words, 90% of those who are charged with a crime, but have not yet been convicted, remain in jail because they cannot afford bail. The new budget will eliminate cash bail for many types of misdemeanor and non-violent felonies throughout the state. Sex offenses, money laundering in support of terrorist activities, using a child during a sexual performance are among the handful of charges that will still require cash bail, if not immediate pretrial detention. Violent felonies, as well as Class A felonies, were not included in this reform; lawmakers plan to discuss these types of offenses at a later date.

In addition to this, custodial arrests for misdemeanors and Class E felonies are common place. The FY2020 Enacted Budget will reform this. Now, those who are charged with a misdemeanor or Class E felony will be issued a desk appearance ticket – much like those issues for traffic offenses.

New York State’s discovery process has been considered one of the most antiquated and unfair practices in the United States. This is changing with the FY 2020 Enacted Budget.

Previously, prosecutors often withheld evidence until the first day of a trial. With the new budget, however, both the prosecution and defense will have to provide all evidence and information well before a trial begins. In fact, the new budget requires all evidence be turned over to the defense within 15 days after arraignment. This ensures the defense has time to fully evaluate and investigate any evidence as they prepare to fight for your rights.

In addition to this, anyone accused of a crime will be granted the opportunity to review any evidence the prosecution has prior to entering a plea. This ensures the defendant is able to enter a plea based on an informed decision.

The FY 2020 Enacted Budget also helps to better protect victims and witnesses. Unfortunately, intimidation and coercion tactics are more common than believed. The new budget will help prosecutors seek protective orders on behalf of these individuals. Identifying information that may affect the safety of a victim or witness can also be more easily shielded.

New York State guidelines require certain types of crimes to be resolved in a timely manner. For misdemeanors, this is within 90 days. For felonies, on the other hand, this is within 180 days. However, the majority of those in pretrial detention are there for much longer than that.

The new budget will require the courts to take an active role in protecting your right to a speedy trial. To do so, the courts will be required to inquire about whether or not the prosecution is actually ready to proceed with a trial. Often, the prosecution will claim they are ready during one appearance then state they are not ready during the next. This is a procedural tactic that often legally delays a trial for long periods of time beyond the actual 90 to 180 days. If the prosecution is not actually prepared, their statement of readiness should not be accepted.

What does this mean to you? If the 90 or 180 day deadlines pass, the defense can file a motion to have the charges dropped due to timeliness.

The criminal justice system is not the only reform you may be interested in. New York State’s FY 2020 Enacted Budget also attempts to reform seat belt laws to better safeguard all those on the road.

Prior to today, New York State only required seat belts to be worn by drivers, front seat passengers, and back seat passengers under the age of 16. That has changed with the FY 2020 Enacted Budget. Now, all passengers, regardless of age, will also be required to buckle up. Failure to do so can result in tickets for both the drivers and adult passengers.

If you or a loved one have been charged with a crime or traffic offense in New York, it is important that you speak with a reputable and qualified lawyer today.

The Law Offices of Michael H. Ricca P.C. provides our clients with the time and attention their cases deserve. We also remain diligent advocates of our client’s rights throughout the entire criminal justice process.

The Law Offices of Michael H. Ricca P.C. is here to help you understand how these reforms affect your rights and specific case. Contact our office today at (516) 500-1647 for your free telephone consultation.